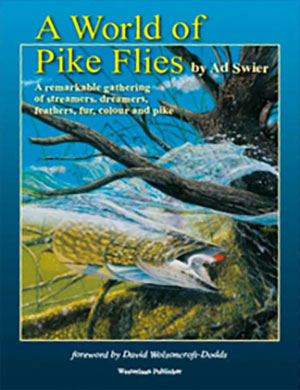 A World of Pike Flies

Dutch fly fisherman, artist and writer, Ad Swier, has been fishing for pike for many years. A few years ago he wrote the wonderful book Passion for Pike, which has found its way on to the bookshelves of many anglers. This new book is "more or less" a follow-up. It deals mainly with the flies (pike streamers) that are used to catch these splendid fish. Again, Ad has assembled contributions and flies from many eminent pike fly fishermen from around the globe.

The reader will find entries from more than seventy anglers from Bulgaria to Ireland, from Scotland to Norway, from America and Canada, and many countries in between. You will not find many recipes but, rather, the stories and thoughts behind the flies. Again you’ll find humour, nostalgia and even controversy.

Ad lives with his family in ‘s-Heerenbroek in the Netherlands, just behind the dyke of the wind-swept River IJssel.

(Only available in English)